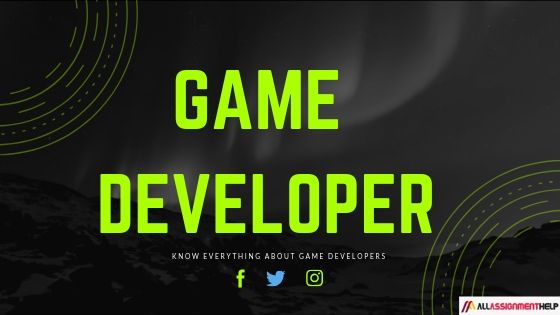 Youngsters love to play video games. As we all can see the advance video game of today’s generation are very famous among every age of people. And over the globe most of the people love to play video games whether they are mobile, computer or PS4 operated video game. But did you ever think how much time and effort it takes to develop a single game? Development of the game is not an easy process it takes a lot of creative artwork and effort of coworkers. In this blog post, you will get to know how video games are made and who made them. The video game is a good career option for. You can have a good career opportunity in this sector. and video game sector industry is one of the most grooming industry in our society.

If we talk about the interest of youth in video games. Then we will get to know that people are playing such kind of games from ancient time. And today when we are advanced, we have developed another form of entertaining ourselves that this video game. And we love to play video games. The gaming industry is one of the most leading industry and it has a lot of career opportunity also. If you are planning to have a career in this sector this blog post can help you. And with the help of this blog post, you can clear all your doubts related to the career in the gaming industry. If you want to know more about the this topic you should take assignment help from the experts to learn about everything related to your topic in a detailed manner.

Who are the video game developer?​

In a very simple way, we can say that game development is the same process of developing software. Basically, a video game developer also develops software for develpoing a game. It is a process which is related to the discipline of creating a video game.
Making a video game is not a single man process. It requires a lot of teamwork and effort. Game development is a process of programming,designing, art and testing. And by the successful execution of all these processes help to make a runnable program that works on several platforms and known as game. It is essential that a developer of the game should be specialised in several kinds of video game console such as Nintendo Microsoft Xbox Sony PlayStation 4.

There are many game development companies such as electronic arts Activision EA sports etc. These are the big banner of game development industries. And they always have a team of game developers. Making a game is a process of researching, creative artwork and a lot of hard work. By doing this finally game companies release any game and expect that it will be loved by the users.

How to become a game developer

Anyone can be a game developer if they have an interest in this field. It doesn’t matter whether you are a scholar in your 12th or not. Also, it doesn’t matter how much do you have scored in your academics.

If you are hardworking and want to pursue a career in this field, This career opportunity can bring a lot of success for you. At the initial stage, you can join institutions which provide you certification in game development. And you should always aware of one more thing that game development is just not programming.

Why this is good career opportunity

Game development is a combination of several processes. And you can choose any of them for your career opportunity. You have to be very creative and eager to learn new things. If you really want to make a career in the gaming industry you should always aware of the updates and changes in this industry.

And in your academic, you will get to know that there are a lot of tools and resources for the development of a game. The one more thing to ignore those who demotivate you and tell you that game development is very difficult. The thing which requires most for the development of the game is you need to be good at math and physics because developing video game is science itself.

the initial requirement of becoming a game developer is a bachelor degree in a relevant background. And you can have a lot of programs to get certificate degree related to this field like computer engineering computer science. You can choose offline or online mode for getting a degree in this field. Because early Basic education is quite necessary for becoming a game developer.

Developing a game is not a single stage process to acquire multiple stages and steps with perfection. There are few types of game developer listed below;

As we have discussed the first and second party developer. Now the third party developers are those who work for video game publisher. Both publisher and developer put their considerable input in designing the game. Developer and publisher both work under a contract and the contract specifies the number of milestones that have to be delivered over a period of giving time.
The publisher verifies the work whether it is processing properly or not. And he can also direct that developing team if the game is not meeting to the criteria and the expectations. If still you have some queries related to the topic you can take help from expert writers to know more about this topic.

Let’s talk about essential information of game developers. They design create a program that could gain the attention of users. The essential education for the game developers is a bachelor degree in computer science, software engineering or any field related to the gaming creation and development. The developer creates the game for platform whether it is iOS, Windows or Xbox. A game developer tries to develop a game for every platform and this requires a lot of education and creative knowledge of art. In a simple manner, we can say game developing of a game is a basically creativity of the human mind by which it reduces human stress.

Job Description of a Game Developer

let’s talk about the job description of the game developer more specifically we can say video game developers are the designer and creator of games. They create and develop a game which includes many expect of game creation. Developing a game is not an easy task it requires a lot of effort and patience. We can say a game development is an initial form of creating a game from its concept to coding and programming. Designing game and its creation involve many expect which include audio production, design visual arts and a lot of things. If you are working in a big banner like an EA sport or Sony gaming industry. you must be aware of the high graphics game creation team and how they work. It is not an easy task you need a team of skilful Gamers, coders and developers for developing a hit game.

Duties of a Game Developer

if we talk about the duties of a game developer, we will get to know there are many components which take part in the development and creation of a game. The developer, designer, producer and graphic artist all give their 100% contribution to produce a final product. Whereas the programmer and software, developers work for coding and programming. Basically, coding and programming are a backbone of development of the game. It requires coding instructions and a lot of operational procedures we can say game and software developer known as the real creator of a game. And create the core feature which includes in the video game. Duties of a game developer include many things which are given below;

The entry level requirement of the language and tools is c++ and my small element of the game that can be added and use while the development of the game. The game developer are also expected to keep up with the updating technology. Whereas the experienced developer of a game development team who is used to make high visual games work in a different manner. They write more complicated quotes and try to manage every program associated with the game.

The essential thing that every student should know

If you are a student and want to pursue your career in this field you have to be very clear about every thing related to this field. Firstly you should have to know about your interest in which phase of game development you want to go. Whether it is story writing phase, creative art face animation work or with the programmings

Your vision must be clear

If you have made your mind about this industry your vision must be very clear. You cannot step back once you are in this field. You should understand your own choice before choosing it as a career opportunity. The gaming industry is the most popular industry and it attracts so many so if you are going to this for your career, your vision must be clear about this industry. You can have a better career opportunity and you will never face any issues.

As we can see with the help of this blog post, the potential of the gaming sector has and how efficiently it can and improve your career. If you are planning to start your career in this sector clear every doubt before entering the sector. Because once the steps are taken and it will be very hard for you two step back. Know about every single detail of this sector and once you are done with your research ask yourself whether you want to choose the sector or not. Because sometimes we get affected by those who you choose this kind of career opportunity and we think that if they can do than why not me. So think about your interest and then select any field for a search career opportunity. If you want further assistance regarding the topic, go for online assignment help from the experts and get information about the intricate areas of this topic.