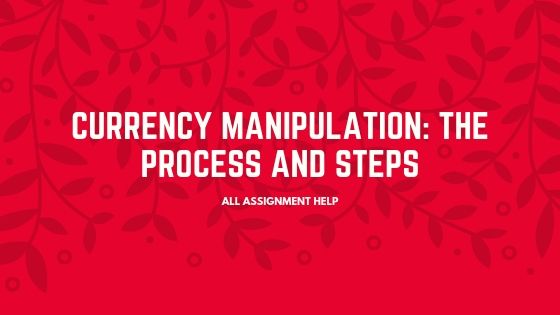 Currency Manipulation: Currency is one of the important media of exchange when two countries trade or establish business relations among one another. The value of a country’s currency is thus an important factor which determines the amount of foreign trade. This provides an incentive for currency manipulations which can help improve the exports and thus the balance of trade. The aspect of currency manipulation is not legitimate but can be accomplished in some strategic ways which are within the legal norms. Now our assignment writing experts in the US explain what is currency manipulation.

What is currency Manipulation

Currency manipulation is also known as currency interventions which are accomplished through a monetary or fiscal policy of a country. In such an intervention, the government sells or buys foreign currency in exchange for the currency of their own country. Such activity influences the exchange rate among the two currencies and leads to the desired situation.

Some of the experts indicate that currency manipulation is foreign exchange market interventions, which is important to boost the foreign operations of an economy while others think that such interventions disturb the normal trade operations. There are various economic units in a country which is interested in currency manipulations and wants to set a target which helps boost their business activities.

Currency manipulation is an interesting topic and a few of our students have used this topic as part of their economics dissertation. We helped them with the application of currency manipulation, however, a few important concepts are discussed in the blog entry.

Why is there a need of currency manipulation?

The government and the policymakers in a country also has a set of objectives which are fulfilled through currency manipulations. Some of these objectives are as follows:

A few more objectives served by manipulation of currency

There are several policies and procedures through which the currency manipulations are undertaken by the government of any country. The central bank of a country can increase the supply of money, one of the after-effects created is the increase in the rate of inflation. There are several challenges which are faced by the policymakers to determine the amount and the timing of interventions. Some of the important methods of intervention include the following:

There have been several cases in the world economy which show the incidence of currency manipulations. One such was conducted by the Swiss National Bank, between the years 2011 to 2015. These central banks have set the minimum exchange rate for Euro and Swiss Franc. Thus the currency of Switzerland could not strengthen beyond a certain limit. Such policy was continued for three and a half years after which the minimum exchange rate was released. There were some sectors of the economy which were benefitted while other sectors faced negative consequences.

China serves as another important example which resorted to currency manipulation for boosting the economy. The country has been known to intervene often and prevent the currency of the country to appreciate relative to other currencies. As a consequence of this act, the country has been able to experience a trade surplus for several years. Some of the experts and critiques even argue that the country has resorted to impermissible “currency manipulations” and therefore some strict actions should be taken by the international regulatory bodies. Some studies have concluded that China’s currency policies were similar to an export subsidy.

Another case of currency manipulations can be seen by the Reserve Bank of San Francisco. As the response of China’s undervaluing of its currency, various countries of the world have resorted to currency manipulations or interventions. The exchange rate regime as followed by China has raised several controversies in the developed economies which also had to intervene their exchange rate to deal with the situation. This undervaluation of the Chinese currency was detrimental for the US workers and business. It started a phase where capital accumulation got diverted from the United States to China.

Another example of currency manipulation can be seen in the case of the Japanese Yen. There was a period from 1990 to 2000 when the country of Japan was experiencing a deflationary situation. Some of the economists indicate that it was a deflationary spiral which was difficult for the country to come out without any policy support. The rate of production in the country came to a stagnant situation, and the rate of unemployment continuously increased. The situation becomes so aggravated that some of the important banks of the country also failed. This was the time when the policymakers felt that it is important to intervene in the currency exchange rate. This estimated that it will stimulate the economy and bring the country out of deflation. Thus with the help of the ministry of finance, the central bank of the country conducted currency manipulations which helped the country come out of the deflationary situations. However, some of the critiques indicated that Japan was artificially devaluing yen in 2014. While some of the experts argued that it was important to boost the employment rate in the country.

Another case of currency manipulation of currency interventions can be seen through Russian ruble. The central bank of the country resorted to currency devaluation to improve its macroeconomic factors. These activities resulted in the surge in the economic growth of the country. For more information regarding currency manipulation or any other topics related to many subjects, you can also check assignment help in Canada.

The aspect of currency manipulation has become a common trend among the countries boosting international trade. These are seen to be more common among the emerging economies of the world. This has become of the important topic for discussion in international trade. Some of the concerns have even been raised by the developed nation like the United States, for the bilateral trade deficient as experienced by the country as the countries like China continuously resort to currency devaluation. They are blaming the currency manipulations, on the government of the developing countries as these developing countries have become successful exporter through the devaluation of their currencies.

Currency manipulation disproportionately affects the optional part of the economy, and American assembling segment lobbyists routinely allude to China as a currency controller. Carlos D. A 2013 examination by Ramirez found that “a one per cent expansion in the portion of Congressional area work power in assembling is attached to the likelihood that locale officials will mark China a currency controller”.