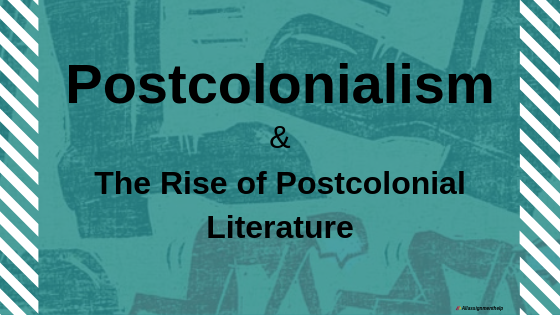 If you are stuck with your assignment or want immediate help in literature assignment go for assignment help from the experts and get well-researched assignments now.

Postcolonialism or later study is the academic research of the cultural heritage of colonialism and imperialism, which centers on the human penalties of the control and exploitation of colonists and their lands.

Postcolonialism assumes a wide range of perspectives, and theorists cannot always agree on a general set of definitions. At a simple level, it can be done through anthropological study to get better information of the colonial period from real life experiences of colonial people, based on the assumption that colonial rulers have untrustworthy statements.

On studying at a deeper level, Postcolonialism inspects the socio-political power associations that maintain colonialism and neo-colonialism, in which the colonialists and surrounding societies, political and cultural narratives are involved. This methodology can overlap with modern-day history and critical theory, and can also take examples from history, sociology, philosophy, political science, anthropology and human geography.

Numerous novelists, dramatists and poets are considered as postcolonial writers. Their work revolves around the postcolonial literature. The works of postcolonial writings include those categories that have some relationship from the imperialism and colonial expansion. Once the colonizers left the country there was a huge atmosphere of uncertainty and people are not sure of what next they have to do. There were a mass exodus and brutal killings. After the end of World War 2 postcolonial literature started to become popular. Those nations going through the decolonization are the nation where postcolonialism can be studied. Countries that were most influenced by decolonisation are South Africa, various parts of the Caribbean, Nigeria, and Indian subcontinent. These are the countries that faced a lot of issues after colonizers left them.

Influential postcolonial theorists and their works

To know the growing focus on postcolonial fiction, a basic knowledge of postcolonial theory is essential. Keep in mind, this is a concise history and is not inclusive in any way! If you are willing to learn postcolonial theory, you can start with some authors about whom we will discuss before going to the topic of our search.

Frantz Fanon’s The Wretched of the Earth was published in French in 1961. While coming out of the Algerian conflict for independence from France, the text examined the potential of anti-colonial violence in this area and other areas also. Fanon was a Martinique-born intellectual. He was also a popular member of the Algerian National Liberation Front, and his writing works inspired many people around the world in the struggle against oppression and racially motivated violence. If you are especially want to read about Fanon as a collector, then you can look for the earlier versions of Fanon’s work. Grove Press printed the first American version of The Wretched of the Earth in 1963, which was translated by Jean-Paul Sartre.

By 1979, Edward Said wrote Orientalism, which was a lesson that examined the relationship between those people in the West and the relationship of “other” in the East. This work by Said has become an un-detachable part in postcolonial discourse, and it has helped expand the area in the past few decades. Edward Said was a Palestinian-American scholar, who received education at Columbia University for the majority of his academic career.

In The Location of Culture (1994), by the theorist Homi K. Bhabha claimed that the human world is seen by connecting with different and unequal cultures, instead of in the form of an integral human world, the belief in the existence of fictional people and places endures faith – “Christendom” and “The Islamic World” “The First World”, “The Second World”, and “The Third World”. To combat such sociological and linguistic deficiencies, Postcolonial Hybrid inaugurates the philosophical value of intellectual spaces, in which vagueness retracts the certainty and legitimacy. Apart from this, hybridism is a philosophical situation that challenges the ethical soundness of imperialism.

In Provincializing Europe (2000) by Dipesh Chakraborty, he portrayed the account of the Indian struggle for independence, and he also countered with Eurocentric, Western learnings about non-Western or Oriental people and cultures associated with Orientals, by giving a proposal that Western Europe was culturally associated and equal to other cultures.

Afro-American literature is a type of literature that has been written by African writers living in the US. It was started by the works of writers like Phillis Wheatley. In the beginning, the literature was filled with the spiritual narratives but later the theme changes to slave narratives. Slave narrative genre was got fame from the writers who have escaped from slavery in Africa by White men. You will find this type of narration dark and impactful. Afro-American writers have described their journey, their struggle for freedom, racism, slavery and atrocities done by Europeans over them. Afro-American writers have rewarded with highest awards like Nobel Prize to Toni Morrison.

A style of African-American literature developed in the middle of the 19th century is a slave story or popularly known as Slave Narratives, which is written by fugitive slaves after their escape from South Africa. They wrote about their lives in South Africa when they were slaves. They wanted to portray the cruelty and inhuman nature of Europeans how blacks were kept as slaves and also wanted to show the declination of humanity in South Africa due to white colonizers.

At that time, the dispute of slavery persecuted literature on both sides of the issue, along with novels such as Uncle Tom’s cabin (1852), writer Harriet Beecher Stove represented the abolitionist attitude of slavery. Southern white writers created “anti-atom” novels in response, allegedly to describe true life under slavery, as well as more serious cruelty created by free labor in the north. Examples include The Aunt Phyllis Cabin (1852) by Mary Henderson Eastman and The Sword and the Distance (1853) by William Gilmore Simms.

When we talk about the postcolonial literature of Africa, then slave narrative is an essential part of it. Around 6000 former slaves living in North America and the Caribbean gave accounts of their lives. Slave narratives are categorized in three forms

There are many common topics and themes such as the dominance of culture, racism, seeking lost identity, inequality or class differences as well as some weird presentation styles in postcolonial literature. Many postcolonial writers and authors have reflected and displayed many thematic concepts, which are in association with colonizers and colonized. Whites have constantly stressed upon racial discrimination on their colonies for their superiority. They considered brown or blacks as uncultured and bestial.

It was most apparent in South Africa that apartheid was included in national laws. Among the most notable acts of this kind include ‘The Groups Areas Act’, ‘The Population Registration Act’, ‘Prohibition of Mixed Marriages Act’, ‘Bantu Authorities Act’ ‘Immorality Act’, and ‘The Abolition of Passes and Coordination of Documents Act’. All of these legislations were limited, restricted and discriminating the blacks from the White colonizers. Both the writers Nadine Gordimer and Coetzee have portrayed in their novels how apartheid destroyed South Africa in many ways emotionally, ethically and financially.

While the area of postcolonial study began to take shape at the beginning of the second half of the 1970s and early 1980s, many fiction writers and poets had started working on the publishing work in the decades after the Second World War.

Chinua Achebe was one of the most famous names when one talks about African literature. His novels mostly revolve around the tribal stories of Africa and how colonial power exploited the natives.

One of the most important postcolonial novels to come into view during this period was Things Fall Apart (1958) by Chinua Achebe. This novel now captures many Anglo Fiction courses, which is not surprising considering its widespread popularity and importance after its first publication. Published in the late 1950s, Achebe wrote the book in Nigeria at the end of the British Colonial period, but an old moment was shown in Nigerian history. In the second half of the 19th century, the leader of an Igbo village tells the story of Okonkwo, which should be witness to the tragic demise of his culture at the hands of colonialism. Nigeria remained a British colonized country until 1960. If you are interested in linking one of Achebe’s works in your collection, then you can see the first UK version of Things Fall, published by William Henneman Limited in 1958, or the first American version of McDowell Obolensky in New York Years later published.

Nadine Gordimer was another popular name in African literature. She was born in Springs in South Africa. Her parents were Jewish. She started writing at the age of, and her first novel got published at the age of 15.

Before Achebe published Things Fall Apart, Nadine Gordimer had already published a book and various short story collections and was about to publish her second novel. Nadine Gordimer was a South African writer, and she was of Eastern European origin, Gordimer never experienced violence or discrimination on the basis of race or color. Racial discrimination and Violence which was originated from the decolonization and apartheid, but she still spent his career advocating equal rights in his country.

Some of her most notable works that belong to north colonial politics and the harsh streams of apartheid include conservationists (1974), Burger’s daughter (1979), and July’s people (1981). A signed copy of one of Gordimer’s works will make a great version of any postcolonial literature collection.

She was born in Nigeria in the year 1977. She is from the new generation of African writers. Her most of the works are Character driven along with that she club the Nigerian background and socio-political events into her stories. Her novel Purple Hibiscus is a perfect example of a bildungsroman. This novel depicts the life and journey of Kambili and her family during the time when the military took over. Some other most famous works by Adichie are Half of a yellow sun, The shivering, You in America. Her works have got fame in the recent past, and she has won many awards for her literary works including Booker prize and Orange prize.

Postcolonialism is a historical time period which represents the after effects of western colonial rule over the east. The transition came right after the end of the colonial rule was drastic for all the countries that were under the European empire earlier. Postcolonial period leads to the loss of identity, sense of nationalism and development of a new form of literature which was termed as postcolonial literature. Many writers came up with their stories and life experiences of the time when White rulers exploited them. Postcolonial literature is filled with the subjects like subordination, slave narratives, violence and brutalities done by Occident over Orientals in the name of uplifting the Orients.

If you liked my blog, then please provide feedback. Your feedback is of utmost importance. It encourages me to write more and bring good content to all the students. If you are facing issues in academic assignments contact online assignment help services to get the best assignment without any delay.

There are many more benefits of taking assignment help from us. Visit our website and make a positive change in your academics. Thank you for reading. 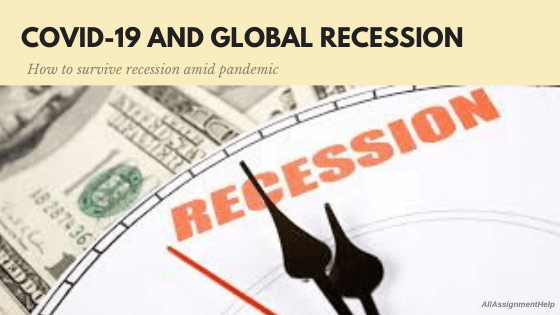