Olla Peeps! In this article, I will be sharing about the balance of nature. Well, you can easily guess the meaning from the term itself that, we are going to talk about nature and how to maintain its balance. 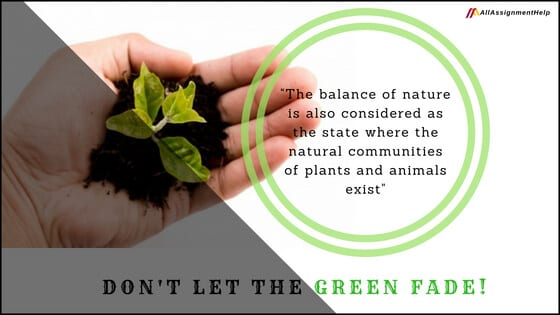 It is a concept in Ecology which describes that the natural systems are in a state of equilibrium. Simply, it means that balance of nature is a concept that speaks of maintaining a balance in nature. If we disturb any one element, then all the other elements get interrupted in the entire system.

It is usually interpreted that the natural state of any system is the best-preferred state and you should not disturb it. The balance of nature is also considered as the state where the natural communities of plants and animals exist. It is then maintained by competition, adaption and other interactions between the members of a community and their nonliving environment.

This theory of the balance of nature may apply where the population depends on each other. For example, in prey systems, or you can say, relationships between herbivores and their food items.

It is also applied on the relationship between Earth and its Ecosystem. The composition of the atmosphere and the weather of the world.

History of the Theory- Balance of Nature

The concept of “Balance of nature” once ruled the ecological research and also governed the management of natural recourses. All this led to a doctrine which became popular among few of the conservationists. It said that “Nature was best left to its own devices. Human involvement into it was by definition which was unacceptable.”

Let’s now learn about the predator and its prey interactions. Later, I will brief on humans involvement.

Predator and its Prey Interactions

Predators and the prey population often show disorderly behavior but within limits. The sizes of the populations change too in a random manner. But, they obey deterministic laws which are based on the relationship between population and its food source.

There is an example to prove this above statement. A study was done on small Baltic Sea creatures like plankton. They were isolated from rest of the ocean. Due to this, it was seen that each member of this food web was taking turns for multiplying and declining. The outside conditions were kept constant too.

An article in Journal Nature stated that “Advanced mathematical techniques proved that when there is an indisputable chaos in the food web then, long-term prediction is not possible.”

There are places where humans equally support in maintaining the balance of nature. Latin America’s rainforests are such an example. These forests are existing because of humans planting and transplanting them.

It is a misconception too that humans can’t maintain ecological balance as they are destroying it. This misconception is due to those who are acting against the laws and damage the environment.

Human activities can also support the maintenance of the balance of nature. The correct example is the Australian Aboriginal practice of “Fire-stick farming.” This practice has resulted in forests to convert into grasslands which are capable of sustaining larger populations of faunal prey.

This is found in the western and northern regions of the continent. Many plant and tree species from the affected areas have now entirely adapted to this annual fire regime. In this process, they need the passage of a fire before their seeds germinate.

2) What is the balance of Nature Hypothesis?

As we all know that hypothesis means, an explanation which is based on limited evidence, or even no evidence at all. It acts as a starting point for further investigations. You can say it’s an assumption.

With the rise of Greek philosophy, all the focus got shifted towards traits gods endowed species, rather than human actions. All this led to a shift of interest from features of nature which were contributing tot he balance. Later Darwin came, and he changed its basics from God to nature. He proved that environment plays a vital role in balancing the ecosystem.

It becomes our duty to protect our nature and the biodiversity. Early Greeks believed that god maintains the nature with the help of rituals, human prayers, and sacrifices. As the Greek philosophy grew, the concept of human help in retaining the nature got de-emphasized.

Later, the discovery of fossils challenged this idea behind Gods balancing the nature. They contradicted the idea that species divinely get created with the necessary features to survive. Later, increasing population and the rising demand brought a question on the functioning of the balance of nature.

Darwin’s theory of evolution cleared out things. The theory explained the existence of fossils. He brought the functioning of nature in the limelight. In today’s time, Nature is still under observance as it is a vast topic itself. The idea of balance of nature still lives under imagination amongst many conservationists and environmentalists.

When Darwin replaced God with the natural selection, the comfort of the balance of nature became less overarching. Today, ecologists don’t recognize a balance. The public who does it, see it as a thing which is to be protected if you need benefits in future.

3) Importance of Balance of nature

Humans play a very crucial role in maintaining the ecological balance. It is because they have the highest thinking capacity in comparison with the other living organisms. If there is sufficient food for all the living organisms, then it means a healthy ecological system. Also, it shows that the balance of nature is maintained.

This why it is very important to maintain this balance as it assures us our survival, stability and most importantly, our existence. When the ecological balance is favorable, it ensures that each organism multiplies and live as expected.

Every living organism gets proper food which keeps them alive. A maintained balance of nature is also necessary as it leads to the continued existence of the organisms. It also keeps in check that no species is exploited or overused.

What happens when the resources are insufficient?

Insufficient food leads to starvation and then death. This reduces the existence of some species. So, if the ecosystem is balanced, then such issues don’t occur. Ecological balance also makes sure that the organisms and the environment are stable. It also enhances an environment which is free from imbalances like floods which may lead to hunger, overhunting of predators, etc.

You need to put collective efforts to make sure that a stable environment is created. Human activities, influence the stability of environment a lot. Tree planting reduces deforestation, and thus, it also prevents undesirable climate changes. A human can easily contribute towards creating and maintaining the balance of nature.

To make it much clearer, the point is that, the balance of nature ensures the stability of organisms and their environment. Balanced ecology brings the existence of the world.

4) Ways to maintain balance in nature 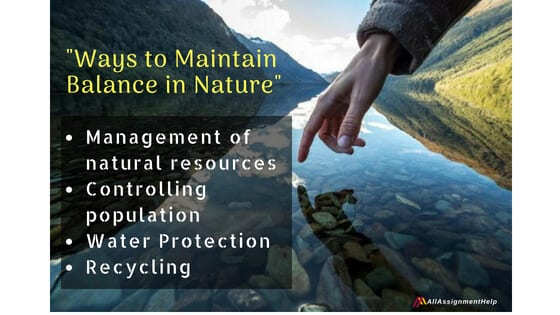 Following are the ways by which, you can maintain balance in nature:

This article was all about the balance of nature. It is essential for us to maintain this balance as it’s for our existence and the existence of other living organisms. So, guys, I hope you like this article. If you did, then do let me know through your comments below.

How We can help you?

At AllAssignmentHelp.com, we strive to provide the best assignment help possible to students all across the globe. We have expert assignment writers working with us who specialize in various academic backgrounds. You can come to us at any hour of the day, regarding help with any topic or subject. We are available 24X7. Also, for any query regarding the above blog post, you can email us on the id given on our website. Thank you for reading. 🙂