In this blog, I am going to discuss the following important points:

What is Naturalistic intelligence?

Naturalistic intelligence is also known as the eight intelligence. A person who possess it has the interest about nature and related things. A naturalistic intelligent person may be interested in oceans, mountains, forests, weather, and animals. A person with this type of intelligence has real love and care for nature. These people have a strong affinity to nature for living and non-living. They have a strong attachment to natural world. But this doesn’t require them to be outside all the time. This interest may be applied to academics. They love subjects related to nature. Subjects like biology and zoology are of great appeal.

It is the ability to identify things that happen in nature. They get refreshed and inspired by nature. People who have this type of intelligence love being outdoors. Also, they feel connected to nature. This interest and attachment to nature begin at an early age.

These people can find common traits among different things related to nature.

Nature smarts people can categorize different things by category. Such people recognized ideas and objects of nature. This, otherwise not easily recognized by other people.

They have the ability to rank people, things, and items. They rank things by significance or importance.

These People have the ability to identify with living organisms. Also, such people identify themselves with their environment.

They are very passionate about nature. They take an interest in reading books which is related to nature. Also, about the work of great naturalists. They are very fond of movies and shows that depict nature. They learn through nature.

People with naturalistic intelligence nicknamed “outdoorsy.” They live to perform every activity outdoor. These people love to be around nature and its surroundings. They like to walk, run, trek, hike, etc. Naturalist’s intelligent people want to explore the forest. They love to invent and discover different things in the forest.

Naturalistic intelligent people love to grow and cultivate plants. They find it very relaxing. The joy they derive from this is indescribable. These people like to play with mud. The feeling of jump around and laughing is just incredible.

These People have the ability to understand subtle changes in nature. Others may not notice such changes. They quickly understand when and what their pet needs. Also, such children make a keen observation of natural differences.

People love to write about nature. They try best to take their interest to wide range of people. They take a deep interest in studying and learning environment.

This is something which is very prevalent in children. They start displaying interest in biology. Besides this, the other subjects they may like are geography and geology.

People with such type of intelligence easily sense patterns. Also, they make connections to elements in nature. They love to categorize rocks, stones, leaves, plants, and mountains, etc. It means they categorize anything related to nature.

People with such type of intelligence create, keep or have collections, scrapbooks, logs, or journal about natural objects. These may include photographs, drawing, pictures, and observations.

Gardner in his Multiple Intelligence gave examples of renowned persons. Some of them who possesses Naturalistic intelligence are:

Charles Robert Darwin was an English Naturalist. He is best known for his theory of evolution. Darwin proposed that all life is derived from the common ancestors. He introduced his scientific theory of evolution through a process, he called as natural selection. Darwin’s done study on the HMS beagle. This allowed him to study and collect natural specimens from across the globe.
Inspiration: Darwin showed how far one could reach with naturalistic interests. His naturalistic intelligence helped him to achieve notable success in his field. His theory also proved helpful for the whole of the humankind.

He was an Austrian naturalist. Schauberger was a keen observer of nature and its various dimensions. Through such observation, he developed his theories. Schauberger’s family used to publish implosion magazine. Darwin expressed various ideas in that magazine. He said in this magazine that aeronautical and marine engineers had incorrectly designed the propeller.
Inspiration: Schauberger is a perfect example of people getting successful in naturalistic fields. He showed the world how to incorporate the naturalistic intelligence in engineering. We can draw immense inspiration from his work.

Gerald Malcolm Durrell was an English naturalist, zookeeper, conservationist, and author. He is famous for founding the Durrell Wildlife Conservation Trust and the Jersey Zoo on the Island of Jersey. However, many people remember him for his work on animals. He was an animal collector and enthusiasts. Also, he had written many books on the same.
Inspiration: Durrell integrated his naturalistic intelligence with linguistic intelligence. He wrote books like “My family and other animals.”

Humboldt was the 19th-century explorer and naturalist. He was the first person who suggested that humans do have the impact on the natural world and causing climate change. His naturalists’ interest derived him from working on botanical geography. This, at a later stage, laid the foundation of bio-geography.
Inspiration: His work on botanical geography could inspire us. He used his naturalistic intelligence on something constructive.

The poet William Wordsworth was a poet and naturalistic. He best summed up his naturalist intelligence in his poem, “The Tables Turned.” In this poem, he encouraged the reader to get up from his studies and go out of doors. He was of the view that We could learn more from nature than other books.
Inspiration: He integrated his naturalistic intelligence into his poetry. We can also derive inspiration from his work.

How to Teach Various Subjects to Children with Naturalistic Intelligence?

People with this type of intelligence have a keen interest in nature. However, we can also teach them other subjects.
Following are some topics which can be taught in relation to nature. 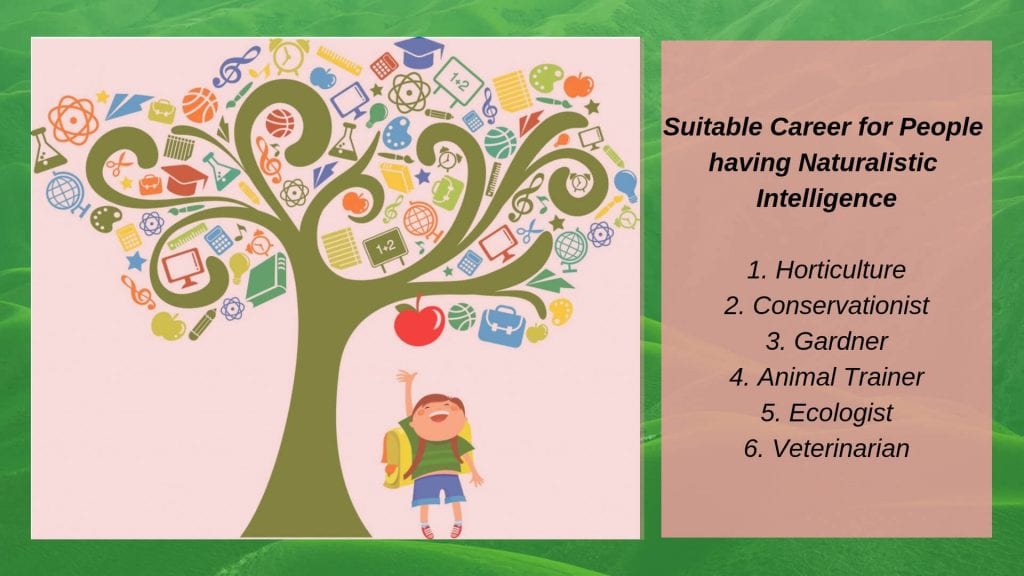 People with this type of intelligence have a strong affinity to nature. They love to cultivate flowers, fruits, vegetables or ornamental plants. Such people like to explore their naturalistic intelligence on such occupation.

Nature is very dear to these people. The quickly get bothered by pollution and its hazard. A conservationist is an option which is opted by naturalistic intelligent people.

Their love for plants is indescribable. They love being around plants. Many of them have their own garden. They find gardening very enjoying and relaxing.

Because of their love of animals, they love to train animals. They can incorporate their naturalistic intelligence into animal training. Animal’s trainers can find jobs at zoos, animal shelters, and animal rescue organization.

People with naturalistic intelligence notices nature above all other things. Nature is of prime importance to them. They love to study the relationship between organisms and their environments. Because of this reason, the job of ecologist suits them best.

They can do anything to heal and restore any animal back to life. It is due to this reason this career suits them best. Their appreciation and love for animals make them perfect veterinarians.

Naturalistic intelligence is one of the multiple intelligence proposed by Gardner. In this blog, I have written about various characteristics of naturalistic intelligence. Through these characteristics, you can identify people with this type of intelligence. These people can quickly identify natural happenings o which others are not aware. Also, such people demonstrate skills and knowledge in the context related to nature. From an early age, they are interested in televisions shows, videos, books, or objects from or about nature. Sometimes, many students have naturalistic intelligence. But they lack intelligence which can help them in their academics. In all such cases, assignment help online is the only option left with them. If you have any doubts regarding anything, you can directly contact us on our website there are so many expert writers which are ready to help you anytime. Thanks for reading!