Hey guys! Want a basic guide to boosting your creativity? Well, here it is. Most of us love to read short stories or novels and watching movies or plays etc. But, only a few are interested in the process of their making. There are multiple elements which make creation perfect and generic conventions are one of them.

This blog post will tell you everything about the generic conventions. If you are a student trying to master the concept you can also go for assignment help and perform better.

Meanwhile, we can have a discussion over the generic conventions and their usage. I am detailing the below-mentioned things for you in this blog post:

-What are the generic conventions?

-What are the types of generic conventions?

There is nothing tough to understand when it comes to generic conventions. All of us have seen movies and read stories, at least once in our lives. Just recall any story which you liked the most or which comes to your mind right now. Think a little bit and try to memorize what made you connect to the characters.

Try to remember what made you relate to the background of the story. How did you come to know about the lives of the characters? What made you feel their feelings?

Have you got any answers?

There must be some elements which made you do all the above-listed things. For instance, if you just recalled a horror movie, there may be an advert of bad weather, say a breezy evening with dark clouds. There may be dead people or some kind of supernatural existence. They made the viewers feel the horror of the story. This is what generic conventions are. 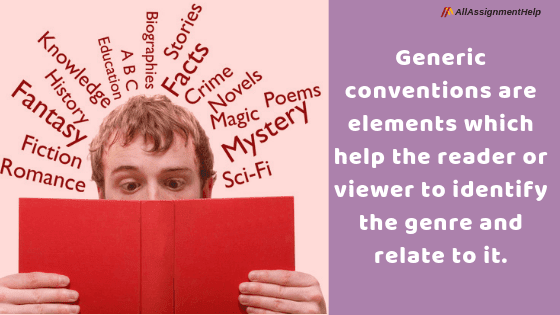 Generic conventions are elements which help the reader or viewer to identify the genre and relate to it. You can also consider them as the features expressed by the texts which allow them to be placed into a particular genre. If you are a student of arts or literature, you need to be aware of the generic conventions. They are immensely important for the makers of a movie or play or a story and for the audience as well.

Want to know why?

Now, when you know what generic conventions are let me drive you into the details and examples of the same. We will also have a quick glance at various genres.

Why so? Because this will help the newbies a lot. Yes, we all have a basic idea of distinguishing the different genres. But, to understand the generic conventions perfectly. It is very important to know the genres in a better way as well.

Those who are not into literature or even movies a lot, may or may not be versed with the details. So, I have listed them here. If you want to know more and learn better go through them:

But, let’s start with the meaning of genre

A genre is any category or style of literature, music or art. Generally, there are many types of genres. The main classic genres are:

Some of the other genres are as follows:

This was a list of all the major genres. Well, the genres need to be explained a little more. Before moving to the types of generic conventions, we will have a look at the description of different genres. Here, we go:

It is a bit difficult to define science fiction in a few words. This is because it involves a large range of themes and sub-genres. Science fiction can be considered a segment of literature which deals with the reaction of humans to changes in technology and science.

The art pieces of this genres deal with the imaginations mostly. It depicts imaginary innovations and inventions. These can be time machines, robots, and spaceships. Such stories are often set in a world that is too different from reality. The authors add tools and scientific inventions which do not exist in the present. We can see the presence of alien creatures frequently.

The tragedy is a type of drama which revolves around the human sufferings and the reaction it invokes. It treats the sorrowful or horrific events caused or faced by a heroic character in a serious and decent tone. By extending the term “tragedy” can be easily applied to literary works, including a novel.

Though, the word “tragedy” is also used to explain some kinds of misfortune and disaster. It precisely refers to a piece of art which probes with highly serious questions. These questions revolve around the role of man in the universe.

The term “adventure” originated from an old French word “aventure” which means fate, destiny or chance event. In today’s world, we consider remarkable adventure journey, event or experience. It is something in which a person takes as a result of chance.

The last words of the last line give the key element of this genre. Adventure constitutes stories in which the characters face undergoes adventure by chance. The “chance” plays a major role in the plot of the story. Such stories involve narrow escapes from dangerous situations, problems which can be solved by skill and intelligence. It can involve exotic places and people, brave deeds, etc.

Mythology comes from Greek mythos. “Mythos” means story-of-the-people and “logos” for speech or word. This means that the spoken story of a group or community or an individual is mythology. It is the interpretation and study of pious tales or fables of a community and its culture.

Such stories are known as myths, and the collection of such stories is called mythology. It can deal with a variety of human condition. These conditions can be evil and good; cultural values. It can be the story of human origins, the origin of animals, places or names. At times it portrays the secret of death and meaning of life. The characters are mostly supernatural. Myths showcase the values and beliefs about certain subjects of a certain culture.

The mystery is a literary genre which focuses on a situation or circumstance which involves a mystery. Most often, it deals with a crime mystery that needs to be solved. The term “mystery” originated from the Latin word “Mysterium,” which means “a secret thing.” The mysterious stories can be non-fictional and fictional as well.

It can focus on both supernatural and real topics. Many mysterious stories revolve around the “whodunit” scenario. “Whodunit” scenario, means a situation in which the story revolves around investigation for finding out the culprit or criminal.

The definition of this fictional genre could be considered as something that constitutes rudiments that are unrealistic, such as talking birds, animals, and other things or magical powers. Another explanation of a Fantasy Novel is any book that constitutes magic or unrealistic settings, generally, set in a medieval universe, or involving mythical beings or supernatural forms as a primary element of the plot, theme, or setting

Fantasy is generally characterised by a departure from the accepted rules by which people perceive the world around them. It represents that which is outside the parameters of our known, reality. You can say it describes impossible or unexplained. Make-believe is what this genre is all about.

Settings can contribute everything that a character can provide a narrative. It can provide it with a tone, emotion, an idea.

As a generic convention, the theme is the central topic or idea explored in a text. Usually, the theme of a work of literature can be stated in one word, such as “love” or “solitude.” A work of literature can, and usually do, possess more than one theme. The theme is generally not stated explicitly in the text, but instead is expressed through the characters’ actions, words, and thoughts.

This is the generic convention which is of most importance. A character is a person, animal, being, creature, or thing in a story. Writers use characters to perform the actions and speak dialogue moving the story along with a line. A story can have only one character and still be a full story. This character’s conflict may be an inner one (within him/herself), or a conflict with something natural, such as climbing a mountain. Usually, stories have multiple characters interacting, with one of them as causing a conflict for the protagonist. 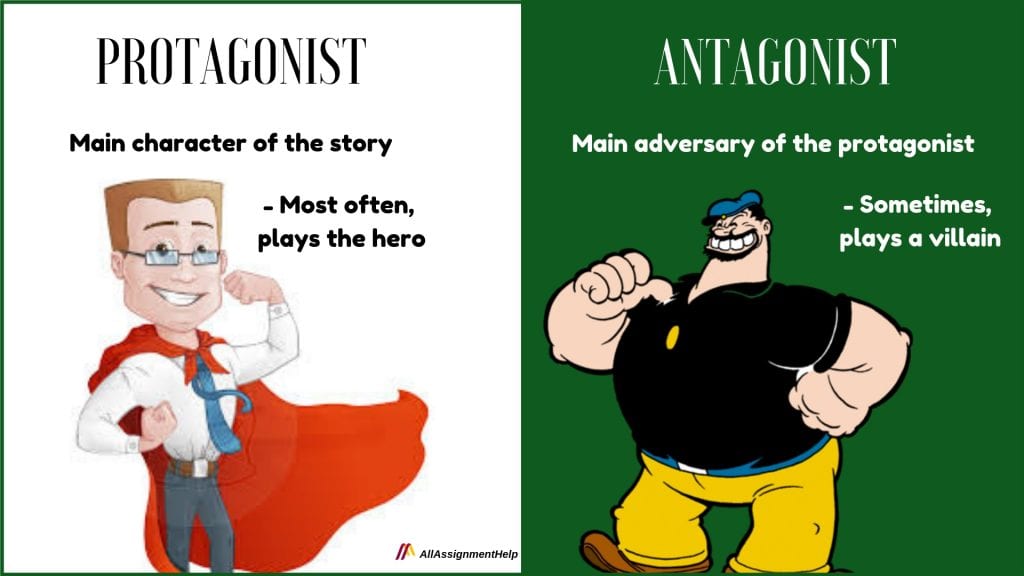 This is the main character, around which the whole story revolves. The decisions made by this character will be affected by the conflict from within, or externally through other characters, nature, technology, society, or the fates/God

This character, or group of characters, causes the conflict for the protagonist. However, the antagonist could be the protagonist, who is torn by a problem within. Mostly, something external is causing the problem.

It is a generic convention which talks about the science of identification, classification, description, and interpretation of themes, symbols and subject matter in the visual arts. The term can also refer to the artist’s use of this imagery in a specific work. The previous iconographical studies, published in the 16th century, were catalogues of symbols and emblems collected from antique literature and translated into pictorial terms for the use of artists.

We can help you to understand better

Knowing the concepts perfectly is indeed a good thing, but practical implementations are not always easy. If you too find it difficult to make use of generic conventions in your work assignment, then you can go for Australian assignment help.

We at AllAssignmentHelp.com have a group of experts who can help you with every hurdle. You can come and choose an expert writer of your choice and get personalised help. For any further query, you can contact us anytime. Thank you for reading.