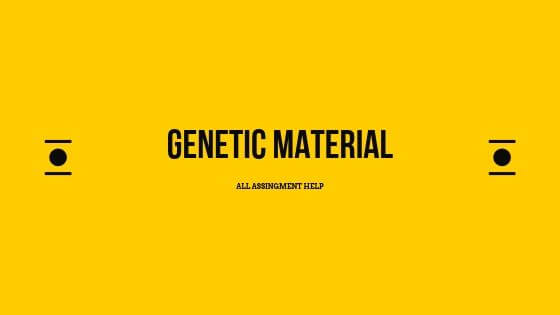 What is Genetic Material?

It is because of the genetic material or deoxyribonucleic acid that is found in the genes of a person. DNA is considered as a hereditary material that is found in the nucleus of eukaryotic cells and in the cytoplasm of prokaryotic cells. These cells present in animal and plant helps in determining the composition of any living organism such as plant, animal, bacteria, humans and others.

The replication of the DNA in the cells of the child from the parents needs to be made in an accurate manner, as a minimal error brings a change in the sequence of the DNA. However, a full complement of DNA is contained within a cell known as Genome. This Genome is then organized and formed in small, discrete units known as genes. These genes are arranged in a systematic manner on chromosomes and plasmids.

The second function of DNA is to help in the formation of proteins that is necessary for the body which helps in the growth and reproduction of the cell. This is the meaning and concept of genetic material that helps in describing the functions of genes in a living organism.

A gene is the major component in the genetic material process and is majorly composed of DNA, which is then read and help in producing RNA molecular with the help of a process called transcription. There is a type of RNA molecular known in the name of messenger RNA or mRNA because it helps in transmitting of information for the ribosome to help form protein synthesis with the help of a process called translation.

These two processes of translation and transcription are together known as the gene expression that is related to the synthesis of proteins. In this expression, the proteins are synthesized with the help of amino acids that is programmed in the gene. Thus, the genetic material that is the DNA, RNA and protein helps in the flow of information from these three elements and is called the central dogma of a body.

Thus, genetic material helps in describing the entire process of replication, transcription and translation that takes place in a gene with the help of stages like initiation, elongation and termination. Now our experts from Assignment Help Australia will tell you about the evolution of Genetic Material.

The evolution of genetic material and the functioning of the cells in living being was seen in the 19th century. It was the period when it was proved that all living organisms are made up of cells that are formed in the process of growth and division of other cells in the body. The process of genetic material then saw an evolution with the introduction of a microscope that helped the biologists to have a close look at the microscopic structure of the cells that are present.

It was only in 1885 it was proved that chromosomes exist in the living organisms are is seen as dark staining threads present in the cell nucleus. The biologists recognized that the ability of these chromosomes is to carry their cell heredity from the ancestors to future generations. At that time chromosome that was found was similar to weight as that of half DNA and half protein.

The discovery of DNA and the power it has to transmit the information of their own replication was seen in 1933. It was the most revolutionized discovery that happened at that time giving a clear scientific reason behind the similarities that existed between children and their parents. The discovery was led by then American geneticist and biophysicist and British biophysicist named James Watson and Francis Crick respectively.

These two scientists were able to propose a model that showed the double-stranded DNA molecule. This was the most recent type of DNA model that was found at that time in which each strand of DNA acts as a template in the fusion of a corresponding strand. Further, the model of DNA introduced by these scientists shows that DNA has the power of replication and was the first to prove that DNA carries genetic information or material from one hereditary to another and help in the reproduction of the entire cell.

The location of these smaller chromosomes is seen in two types of organelles. One type of organelles are in the animal cells and is known as mitochondria and the other is seen in the plan cells where it is known as chloroplast. The small chromosomes located in one of the organelles carry information coding about the proteins and RNA molecules that are demanded by the organelles. This shows the way in which the system of DNA evolved over time showing its role in the body of living organisms.

However, it is not so in present-day RNA in which it is seen that RNA of a cell is synthesized by special enzymes. Moreover, even though the RNA cell is synthesized in the nucleus in which the DNA is present, yet it is then transported to the cytoplasm. This happens way before they conduct their functions in the cells of a living organism. Now our assignment experts will explain to you with the help of an infographic.

Structure and Function of Genetic Material

There is innumerable structure of a DNA that exists in the body of a living organism. DNA is said to contain specific characteristics and nature that help make a living being different from another. This makes it important for the cells to keep the DNA in a healthy condition.

This is because DNA consists of various types of information that it can use it in defining the characteristics of a living organism as many times as they want. Moreover, DNA is a well-organized genetic material present in a cell that keeps the information safe. This is done with the help of three chemical bases seen in DNA such as adenine, cytosine and thymine. These bases are seen to pair with each other with the help of sugar called ribose and phosphate and this helps in protecting the information.

Another structure of genetic material is known as genotype and phenotype. The genotype of a cell is known as a full collection of genes that a cell contains, on the other hand, a phenotype is a type of nature or characteristics that comes out as an outcome of those genes. The genotype goes under the different environmental condition such as A and B and then converts the genotype into the phenotype, which differs from one living organism to another.

Use of Genome Data

Genome data has different types of use in living organisms due to the characteristics of the cells and genes. The differences in the genetic differences lead to the differences in the susceptibility rate of the infection of disease among the living being. This shows that the understanding of genome data and makeup that exists among the individuals is important for the clinical industry.

This is because it is after studying the genetic structure a doctor is able to form a specific treatment for the patients. There has been a new introduction in the field of the genome data known as ecological genomics that helps in understanding the way in which genotypes of different living being interact with one another in nature. Ecological genomics is also important in the field of medical applications that focus on the way pathogens interact with different individuals.

Thus, a close analysis of this ecological genomics medical professionals is able to look at the genotype of an individual and then plan out the treatment.

his is because it is after studying the genetic structure a doctor is able to form a specific treatment for the patients. There has been a new introduction in the field of the genome data known as ecological genomics that helps in understanding the way in which genotypes of different living being interact with one another in nature.

Ecological genomics is also important in the field of medical applications that focus on the way pathogens interact with different individuals. Thus, a close analysis of this ecological genomics medical professionals is able to look at the genotype of an individual and then plan out the treatment.

With time different genomics sequences of pathogens have come up over time. One of such genome is bacterial genome that is easy to the sequence in as less as one day. Moreover, the speed and cost of forming a sequence of a genome have reduced over time and this has been a beneficial aspect for individuals as well as clinical.

At present individual can easily submit a sample of the human genome and as a result, receive information on the personal genetic behaviour, ancestry status and information on other diseases. This shows the areas the process of genetic material and working of genes is being used in the field of science and the kind of information it is providing.

In a body of a living cell these different molecules that are formed in kept in a specific place showing that the cell is organized in a proper manner that is essential for its growth and division. However, the organization of such an internal structure of a cell requires a continuous input of energy. Moreover, when a eukaryotic cell is seen to examine under an electron microscope then it becomes clear that the organelles have led to the division of interior into varieties of sub-compartments.

This is yet another type of communication that shows that the formation of a multicellular organism in a body generates from a minute collection of similar kinds of cell that is present in an embryo. The generation of a small collection of the cell is done with the process of cell division and specialization that leads to the formation of an entire community of cooperating cells. Each cell that is formed in the process is seen to have different roles in the life of the organism.

The process of intercellular communication and organization of the cells it is seen that fertilized egg multiplies slowly in a form and lead to the formation of an entire family of the daughter cell. These daughter cells that is formed is seen to adopt the function and characteristics based on the place it has in the entire assembly.

Further, the daughter cell that is formed has the same chromosomes followed by the same genetic information. However, they have different kinds of cell behaviour and structure. This is the process of communication and organization of cell in the intercellular method. For more infromation, our experts from Assignment Help will help you.