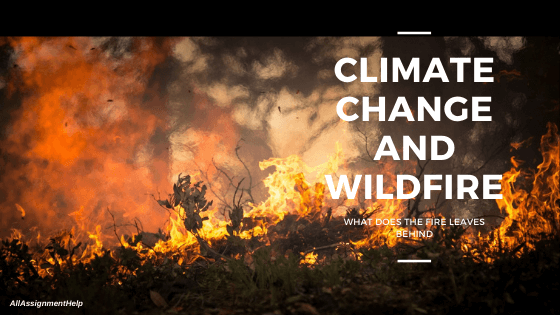 How climate change is increasing wildfire around the world
Wildfires occur when all the essential elements of fire triforce come along in a susceptible area. There are several causes of wildfires that deserve a detailed discussion. However, the one that dominates of other causes is – climate change. It has been a key factor in the increasing number of forest fires. Climate change and wildfires have sadly become highly inter-related.
Among all other factors such as the presence of trees, shrubs, soil moisture, high temperature and potential fuel, climatic changes are a dominant add on to the wildfire risks. This is because all the primary factors are strongly tied, either directly or indirectly to climate variability and change. In the US alone, the number of large wildfires has doubled between 1984 and 2015. The reason being climate change that dries the organic matter that has the ability to burn and spread the fire even more. This matter later acts as a forest fuel.

How much of the wildfire is human influence?

Not all deadly wildfires are unstoppable. In fact, 90 per cent of them would have occurred if humans were careful. Studies show that human-driven wildfires are creating a menace. In the US only, 84% of fires have been reported to be started by humans this year. As per the U.S. Department of Interior, wildland fires are mostly human-caused. Careless activities that are deemed harmless or trivial by people end up in giant fires. Downed power lines, campfires left unattended, burning of debris are such activities. Some people don’t believe but even the small cigarettes that are discarded negligently cause wildfires. Intentional acts of arson are yet another reason that has human in the centre. After all these factors there are a few natural and unstoppable reasons that can ignite a fire – lava or lightening.

What do you understand by wildfires?

Wildfire, also known as wildland fire is a term given to uncontrolled fire that takes place in a forest, bushland or grassland or land sown to crops. When people say term like a bush fire, forest fire etc. they refer to the specific types of wildland fire. Depending upon the region where the fire occurs and its characteristics different terms are used to address it.
The risk of wildfire varies with climate and weather conditions. Drought, wind and heat dry out the timber or other fuel and makes them easy to ignite. The intensity of small scale fire is increased by heat, wind and drought. Topography also affects the wildland fire that spreads uphill fastly and downhill slowly.
You should know about certain wildfire fuels: