Prev 1.1 What to expect in this course?
Next 1.3 Is there anything better than PESTEL Analysis?

1.2 Why PESTEL Analysis is important? 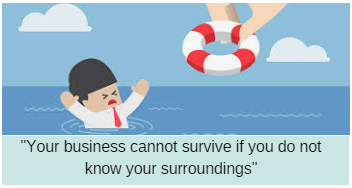 Robert Duke wants to start his own business in smartphone market. He has huge inherent wealth and he is ready to make good amount of investment to manufacture and sell smartphones. He hires all the staff members needed to setup a smartphone manufacturing unit. His company manufactures its first smartphone lot. His salesmen reach the market to sell the product but it turns out that nobody needs what he is selling. It is a huge shock for Robert as he has already invested large sums of money in his dream. He wants to figure out what went wrong in his effort.

Can you figure out what could have gone wrong?

There can be many answers to this simple question. It may be possible that the preference of smartphone customers have changed, customers cannot afford the smartphone, competitors have better product, or anything else.

But, Robert cannot speculate any reason out of the blue for the sake of justification. He has to get to the core to know what went wrong. For this, he has to study the market. PESTEL Analysis is one of the several tools that is used to study the market scenario. I have discussed about other tools in my other courses, which you can see here.

PESTEL is used to study the macro environment. It will give Robert an overall picture of the market where he has his business.

Now one question arises, “Can’t Robert just ask the customers why don’t they need his products? Why is there a need to know the overall picture of the market?”

You can say that it is a top-down approach to understand a market. PESTEL is like a fence of a garden. If fence is broken, it will be hard for you to keep watering and medicating your plants to keep it alive. You never know when a wild boar will come rushing into your garden breaking everything apart! So you have to know if the fence is strong and whatever you do within the fence will be within the fence and protected.

A practical example can be the political scenario of a country. Suppose Robert has a local Ukrainian community as the target market. On survey, Robert finds out that this community can buy the smartphone if it has Ukrainian language in it. Excited over the information, Robert spends some more of his fortune to install software in Ukrainian language. After spending three weeks over the changes, he reaches the market with his product to sell. Unfortunately, he finds out that the political situation of the country is in turmoil and all the members of the Ukrainian community will be deported to their home country in the next one week. This is not a good news for Robert’s business!

You can see why it is important that in order to understand the core issues, Robert should start his market study from the top. He has to know that each variable that surrounds a market is stable and favorable for his business. Political scenario, economic condition, social orientation and preferences, technological advancements, environmental concerns, and legal issues are the fence of a market. These factors surround the market and any changes in these factors will severely impact the internal state of a market even if everything was looking good from the outset.

Each factor has its own importance based on the situation. No one is more important than other.

The diagram below will give you a sense of understanding of what I have been talking so far: 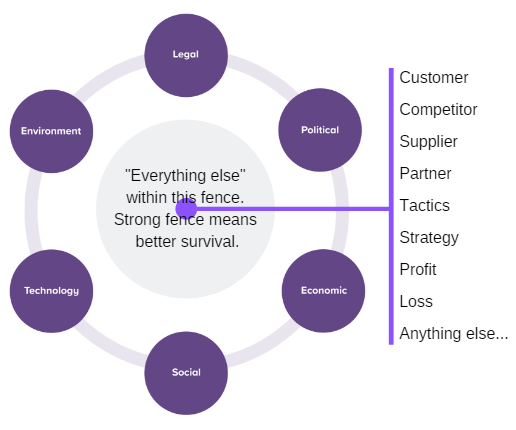