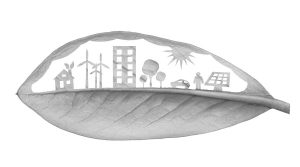 Let us continue with the example of Robert’s smartphone company. Suppose Robert’s business in United States is flourishing and he has started to earn decent amount of money. Now Robert has decided to expand his business from United States to another country. Robert is inherently super-ambitious and instead of looking at nearby countries such as Mexico or Canada, he wants to launch his product in India. Robert has a unique fascination with the India and Indian people. So, let us help Robert fulfill his desire to expand his business to India. But before he can set his foot in India, he has to know whether the country is suitable for him.

For the sake of this section, we will help Robert only with the economic analysis, for other analysis Robert has to wait till we study further.

Balance of trade is the difference between the export and import of a country. Every country wants to have a positive balance of trade. Positive balance of trade is created when a country exports more goods than it imports. It can be used by the country when it faces tough times such as recession or when it needs to create demand for goods. You can understand it by an example. If you have a shop, and you buy more than you sell, then you will lose out on your cash store. But if you sell more than you buy, then you will have cash in your hand which you can use for other activities.

Look at the chart below.

It is the balance of trade situation of India. It is certainly not good. After 1990 India opened its door for global economy and continued trade with more imports has taken its toll.

But Robert should not be afraid of this fall, Balance of Trade is not the only factor that counts in economic analysis. Let us move on to the next.

It is the profits registered by the corporate houses after paying its expenses. The chart below shows the current situation of India: 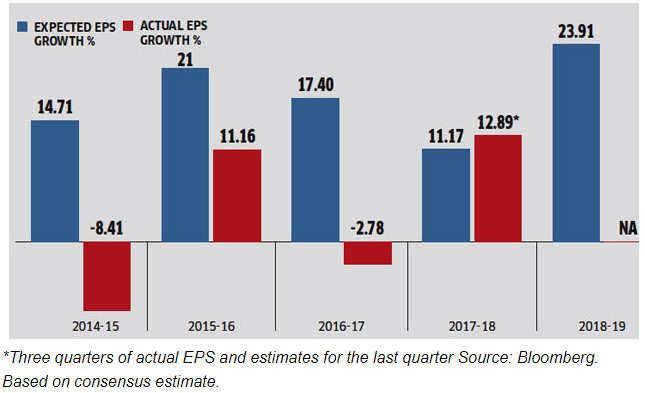 As you can see from the graph above, there is the expectation that the earning per share will rise in the current financial year which is a good news for the companies. However, you should not go by this overall value, it is the combined representation from all the industries.

As Robert is in smartphone business, he can look at the smartphone companies and their performance. As per a report, Indian consumers spent $7500 million in purchasing Chinese smartphone alone in a year. This is quite an impressive figure and good news for Robert.

It is the rate of interests at which the banks give loans to the citizens and corporate houses. The rate of interests for business in India is ranging from 11% to 17%. Robert can bring in his own fund or take loans from the bank that is giving loans at lower interests.

Currency strength is determined by interest rates, economic policies, and stability of the government. If a country has strong currency strength, it will have strong purchasing and selling power. In comparison to Dollar, Rupee is very low with the ratio of 1:73. The graph below shows the trend: 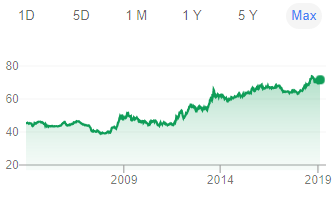 Here, you can see that the rupee is not performing well for very long and is continuously deteriorating year after year. This graph means that India has low selling and purchasing power.

But as every coin has two sides, so is with the weak rupee. India can attract more tourists who will have stronger purchase power in the country. Tourists will prefer to buy more goods and it is more likely to increase the demand for the Indian goods.

CPI shows the cost of living of the people living in a country. The cost of different things used by the people such as vehicles, medicines, electronics, and others are factored in to calculate consumer price index.

If a country has high inflation rate, it means that the people have to pay more for the same product. The increased cost leads to the fall in the standard of living. However, if the inflation is as per the rise in the income of an individual, then it is fine as the consumer will be able to purchase same product without affecting his other aspects of living.

So, when checking on the inflation rate of a country, you must see if the income of the people has increased. Both should be in tandem to each other.

In the graph below you can see the current and expected inflation rate of the country. It is on the fall. 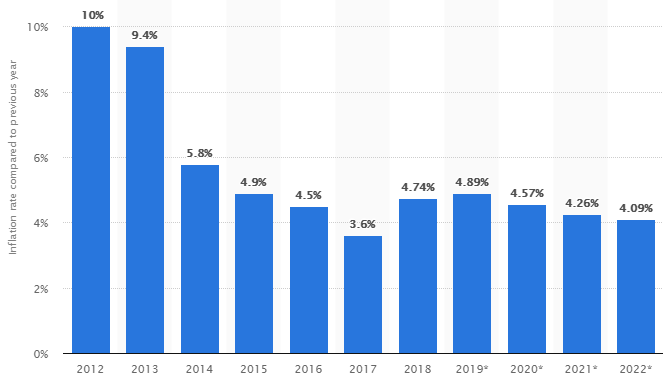 It refers to the number of people who are looking for work. A 3% to 5% is considered acceptable value. If an economy shows higher rate of unemployment, then it means that the people have less money to make purchases.

In the graph below you can see the unemployment rate of India. The situation seems acceptable with the values staying within the accepted range of 3-5%. 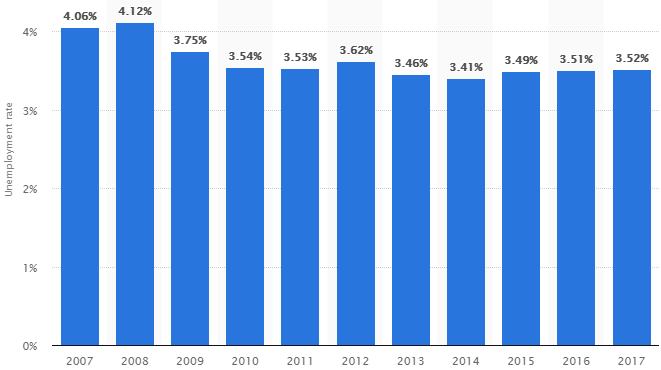 The earnings of the individuals should rise in tandem with the increase in the cost of living of a country. Lower income will reduce the purchasing power and lesser number of individuals will make the purchase. They will focus on spending on products that are of extreme necessity only.

In the graph below you can see the daily wages of Indians:

In the graph you can see that on average a person earned meagre $3 in 2012. As per ILO report it has gone up to around $5.5. The scenario is less favorable.

But it can be attributed to the size of the population of the country which is around 13.3 million.

GDP shows the health of an economy. If the GDP is increasing, it shows the economy is strong. The graph below shows GDP growth of India:

You can see that the trend is showing strong promise. But you should not get swayed by the rise as there can be factors that can lead to the rise which is not directly related to the economic activity. For example, quantitative easing and government spending also boost the GDP value. So Robert has to watch for these two values too while making the decision.

You can see this trend of investment and can say that the investors are positive for India. 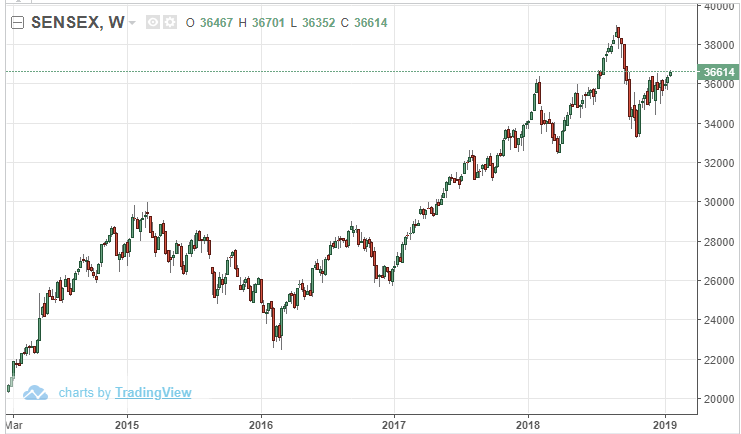 Now we have covered few of the economic indicators and overall we can guess that the situation of the Indian economy is favorable for Robert to enter. Here, I have given you a glimpse on how to see each of the indicators, but an in-depth analysis would help you decide the real scenario. You have to give weightage to each of the indicators as per it’s important to the your business before concluding anything.